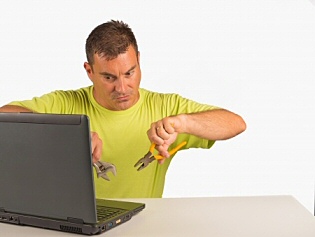 END_OF_DOCUMENT_TOKEN_TO_BE_REPLACED

Posted in Advice, How. NOT. To Do Stuff, Tech Misadventures | Comments Off on Why You Shouldn’t Let Billy Bob “Help” You With Your Computer

Kathy needed help. She was running a small business from her home — one completely dependent upon internet access and two software programs that I frankly hadn’t heard of. Not that it necessarily mattered so much to me that I hadn’t heard of them. The principles for troubleshooting such problems tend to be pretty much the same. But since her problem was with programs that are not commonplace, Kathy was worried. All the more so because her business depends on them.

END_OF_DOCUMENT_TOKEN_TO_BE_REPLACED

Posted in Case Studies, Tech Misadventures | Tagged Case Studies | Comments Off on The Case of the Unreachable Software (Case Study)

Today I had one of those strange experiences.

I was called in to look at a computer that had recently been upgraded by one of the more prominent IT shops in town.

They had upgraded Bill’s hard drive (which had previously been a tiny 20 GB), and his memory — all at a very reasonable price.

Except… now the computer would suddenly and spontaneously reboot after running for about 8 to 10 minutes. Like clockwork.