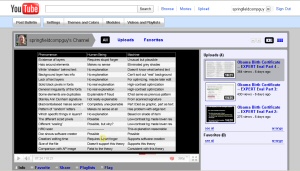 We live in an age in which the internet can be used for all kinds of extraordinary communication.

The internet gives us access to things past generations never had access to, and the opportunity for almost anyone to publish their opinions to the world.

One way to do this is through YouTube. Several videos posted there recently have been drawing hundreds of thousands of views. The ones I refer to claim that Barack Obama’s long form birth certificate, released on April 27th, contains obvious evidence of fraud.

The videos have great conversation value. But are they true? That was immediately what I wondered.

It’s probably because I personally have no great love for Mr. Obama (I personally think he’s bankrupting the country) that I decided to investigate for myself. After doing some investigation, I realized I had plenty of good information to be able to contribute to the discussion myself, so I decided to post my own video on YouTube.

There are a couple of things that might be useful here.

First is that if you want to do the kinds of videos I’ve done (which are focused on the computer screen rather than simply being recorded from a camcorder or digital camera), you’ll need a microphone and the right software.

I can recommend BB Flashback Express from Blueberry Software. It’s free, and does a great job of capturing what’s happening on the screen. You can get it at:  http://www.bbsoftware.co.uk .

So it’s good for recording. But if you’re going to upload videos to YouTube, you’ll want some simple editing capability.

The two most key capabilities you’ll need are the ability to extract a selection from a video, and the ability to paste smaller selections together to make a longer video.

The extracting you can do in BB Flashback Express. All you have to do is select the frames you want to export, then export them to an AVI file.

Once you’ve exported a segment or two, you’ll want to join them. This can be done with another free program called Machete Lite, from http://www.machetesoft.com

To join videos, open your first video, then move the slider all the way to the end. Then go to Edit in the top menu, and insert your next file at the current position. You can append more videos by moving the cursor to the end again and repeating the process.

In order to upload videos to YouTube, you’ll need a YouTube account. Once there, the options are fairly self explanatory. Of course, your videos don’t have to be screen-capture videos. You can also upload videos that you take using your digital camera.

For those who are interested in seeing the videos produced (4 of them in the past couple of days, so far), you can reach them through http://www.youtube.com/user/springfieldcompguy. In the future, I will probably post additional videos there related to other computer topics as well.

If you want to watch just one of the videos posted so far, and see the kind of results you can get with screen-capture software and very simple video editing, I would recommend Part 4. By the 3rd and 4th videos, I had discovered how to improve the sound (point the microphone in a different direction than I had it), had learned that in order to keep things really moving I definitely need a pre-written script, and began using YouTube’s handy annotations feature to add notes to the video.

And if you do happen to go to YouTube and watch any of the videos, I could use some “Likes.” Apparently I’ve kicked the hornet’s nest by doing an honest evaluation instead of jumping on the bandwagon of declaring the file released this week fake.

The whole episode also illustrates another good principle for an age in which everybody can so freely publish their opinion: whichever side of an issue you’re on, you can’t necessarily believe everything you see on YouTube.

[Note: This initial investigation of the “forgery” claims (and the backlash) led me to write a book definitively answering the questions people had regarding Obama’s birth certificate, and to do further research that answered questions regarding Presidential eligibility in general. See www.obamabirthbook.com for more details.]

This entry was posted in How to Do Stuff, News and tagged birth certificate, obama, video, youtube. Bookmark the permalink.